John is a manager in an engineering business. I’m seeing him for leadership coaching and this is our first session. I ask about his current challenges and he tells me he finds it difficult managing the expectations of his bosses, employees and clients along with dealing with safety concerns related to his role. He looks stressed and tired and he sighs deeply as he tells me this. 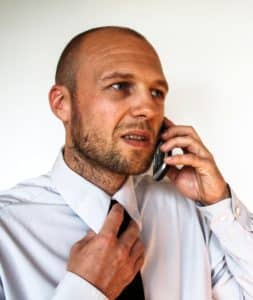 I mention that his Managing Director used the term “workaholic” to describe him and he agrees with a wry smile that it fits him to a ‘T’. He explains that his concerns about doing things right and his fears that he might get something wrong keep him at work late and awake at night. He’s beset by fears of making a mistake, even though logically he knows it will all be fine.

Next, I ask about his goals. He says he wants to advance in the company and earn more money for his family but as he tells me this he sighs deeply once again. At home he has a wife and two kids, and another on the way. He and his wife want to move into a better area. He knows he should be networking more but he finds that difficult. And again he sighs.

I can already see where this is heading, so I start my intervention.

First I deliver the bad news:

I tell him what he already knows but has been denying: his situation is unsustainable. Taking on more negative stress while he can’t even manage the stress he’s experiencing now is not going to take him where he wants to go. He’s heading for a crash and burn. He knows what I am talking about, and he has to agree. But he can’t see a way out.

Then I deliver the good news:

“This is your lucky day”, I say. It’s a line I’ve come to use quite often now with corporate leaders. I point out that the problem is not just in his mind, it’s in his body too, referring to his sighs and easily observable stressed and depressed demeanour as proof. And then I proceed to teach him the two golden techniques that will release him from the pressure he’s under and free him to achieve what he really wants with less stress and a stronger sense of his own power.

What are those techniques?

One is Simple Energy Techniques (SET), a gentle and natural acu-point tapping technique which I co-developed with my colleague Dr David Lake. SET evolved from Emotional Freedom Techniques (EFT) and is very effective and user-friendly and equally effective. It’s a simple (as the name implies) process of stimulating various body energy points via gently tapping on them. The results of which are often surprising and profound.

SET is great for releasing the stress and negative emotions that have been preventing you from being able to perform at your peak. Most people can learn it in just a few minutes and they are frequently astounded when they discover just what it can do for them. One senior leader, after a coaching session at a critical time in his business, said: “Tapping saved my life!” It’s every bit as true for John too, who has now found a way to release the stress and pressure that had been weighing him down, enabling him to get back to focusing on what’s really important in his life.

The second technique is a powerful process I developed that I’m currently calling Intention-based Energy Process (IEP). IEP enables you to rapidly release emotional stress and restore yourself to a place of clarity, calm, and focus. IEP uses specific intentions that function as commands to your subconscious mind to release the fears, emotional attachments and negative beliefs that have been keeping you stuck. It can also help to clear the disturbed feelings in your body, and restore your energy back to flow. When you feel clear in your body and your mind you are able to make good decisions. And that is a great place to be, especially for a leader like John whose actions and results have an effect on the entire company’s trajectory.

Within minutes after introducing these techniques to John and applying them to his work and home stresses, he starts to relax. But that’s just the beginning. Next, he starts to see possibilities where before he saw only barriers, he finds he can access inner strengths that just moments ago were swamped under layers of stress, pressure and feelings of failure. He starts to come alive again. His eyes get a spark and he looks like a younger, more carefree version of himself: one who welcomes the challenge of doing something great.

He walks from my office with a new spring in his step. His life is no longer on a pre-determined trajectory spiralling ever-downwards to an ignominious end. There is a chance now, just a chance that he can have what he wants in life and that he might even get to enjoy it…

Two months later I ring the MD. “How’s he going?”, I ask. “He’s like a different person”, he replies, “More positive, proactive, more focused, just totally different.” They are so pleased with his changes that they are now considering him for a more senior position.

This is a regular scenario for me now, it’s what I live for and what I love about what I do. I get to help my clients to rediscover that spark, to access and reawaken that part of them that is so much bigger than whatever problems their role or life can throw at them. I help them get back in touch with the things (that aren’t really things) which are really important to them, and to focus their life and energy around that. I help them to achieve their goals and even more importantly to discover and live their true values. And in the process I help them to be happy again.

Where can I find out more?

See this webinar recording to learn more about IEP: